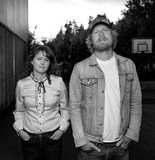 Friday August 27 Sweetheart is following up their award-winning debut album with new material. «I Remember Us, My Dear» is the first single from this autumn's upcoming EP. Earlier this year Sweetheart won a Norwegian Grammy (Spellemannpris) in the country category for their self-titled debut album which was released October last year. The album was critically acclaimed for its acoustic melancholy, but with the new single «I Remember Us, My Dear», the quiet duo shows a new musical development. The new single boasts both drums and a newfound sound of summer and optimism. Yet, the melancholy still murmurs in the background in this lyrical review of memories that lie like faded negatives on an old film roll, from first encounters to car rides to boat trips to moving into a house where the flowers wither.   The single was recorded and mixed by Bror Forsgren in Studio Paradiso in Oslo with the windows open, during hot early summer days in 2021. Forsgren has produced the song in collaboration with Sweetheart and he also plays bass on the track. Sweetheart now consists of John-Arne Ø. Gundersen (guitar and vocals) and Anne Mette Hårdnes (piano and vocals). On «I Remember Us, My Dear» they also have collaborated with the left-handed guitar hero Stian Jørgen Sveen on acoustic guitar and square-neck resonator, and the world-famous rhythm machine Christer Engen, formerly known from Bigbang and Turboneger, on drums and percussion.