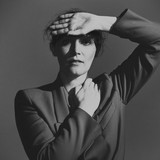 Sarah Blasko writes songs that strike with rare immediacy, clarity and purpose. Melodies beguilingly simple, lyrics honest and direct. Music steeped in atmosphere and mood. On the cusp of releasing her sixth studio album Depth of Field, Blasko has reached rarefied status. From the now-classic debut The Overture & the Underscore (2004) through to the stunning synth-laden Eternal Return (2015), her five-album run of genre-defining indie-rock and art-pop is unparalleled. For those familiar with her work, it may come as a surprise that Depth of Field is the first in Blasko’s storied career recorded entirely in her home-town of Sydney. Indeed, much of Depth of Field was written and recorded during a two-week period as artist in residence at the Campbelltown Arts Centre, a community arts organisation in the western outreaches of Sydney. Campbelltown allowed Blasko and her band to explore the influence of a space on the song-process. Away from prying eyes, under bright lights and on a theatre stage with resonance and ambience, she and her band captured performances of warmth, sensitivity and power. The album’s opening song and first single is the euphoric Phantom . Ominous synth and piano are paired with the unbeatable groove of rhythm section Donny Benét (Kirin J Callinan) and Laurence Pike (PVT). Frequent collaborator and classical composer Nick Wales’ provided intense string orchestration while Blasko’s remarkable voice sends the music soaring.