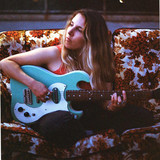 “That was a huge lesson for me: if it doesn’t feel good, don’t do it,” says Alyson McNamara about “After Hours,” the opening track of her latest release Let Me Sleep. It’s a song that Alyson wrote nearly ten years ago and it was almost included on her 2018 album We All Heard Nothing. But the sonic layers and quick tempo of the 2018 version didn’t sit right with her so she scrapped the song. Over the years, “After Hours” blossomed into something new and the version heard on Let Me Sleep has a hazy and laid-back vibe that sets the introspective mood of the entire record: “Take a deep breath,” Alyson urges. By the end of the track, she is revitalized and, ready to take on whatever comes next, declares: “Another page has been turned.” Let Me Sleep marks a new beginning for the Toronto-based indie-folk musician. Alyson has toured across Canada with JUNO Award-winning band Said The Whale accompanying on-going collaborator Dave Monks