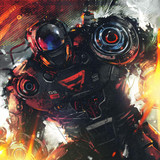 Ray Gun Hero is a cyberpunk producer who blends modern production techniques with retro cyberpunk elements. His musical interpretations are those of futuristic dystopian cities overwhelmed by artificial intelligence, androids and cyborgs. A landscape where the human experience is a struggle, but the fight for survival continues. Born and raised in the U.S. his attraction to music production began in his teen years when he purchased his first drum machine and synthesizer. He later went on to DJ at many metro area clubs in the Northeast with a strong affinity for trance music. After a long hiatus from DJ’ing and music production he reinvented himself in 2016 under the moniker Ray Gun Hero. Since then Ray Gun Hero has released multiple EP’s and singles with a re-released full length album Sectors in December of 2020.