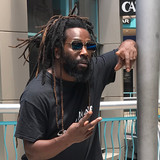 Wayne Dreadski is a one of a kind recording artist. If you love the modern sounds of hip-hop, tropical house, dubstep, trip-hop, acid jazz, or techno, you can thank the Jamaican music pioneers of dub music (a.k.a. dub reggae). Long before current music icons like Skrillex and Avicii were born, Jamaica’s mad scientists of sound were using technology and experimentation to create studio magic. Using little more than mixing boards, effects processors and their imaginations, late ’60s dub artists like Osborne “King Tubby” Ruddock, Lee “Scratch” Perry and Errol Thompson reinvented the roots reggae sound to create a sub-genre known as dub. Like most of today’s popular dance styles, dub music prioritized rhythm as the focal point, with production that emphasizes trippy effects like reverb, echo and phasing. Wayne Dreadski brings a thick and heavy sound. The timing of the beats in his one of a kind music gives it a hypnotic feel because of its relaxed nature. Drum styles have been introduced and incorporated in Wayne Dreadski’s music which gives it a unique and exciting feel. Wayne Dreadski has worked on his vocals to preserve the natural tone of his voice and can also be identified with his style