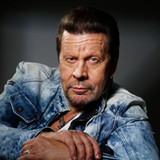 Pate Mustajärvi began his career in music in 1977 when he, with some friends, formed a band called Popeda. Now some 40 + years on the band has become somewhat of an institution in the Finnish music scene that continues to play to sold out crowds. In the current line-up Mustajärvi is the only original member. While actively gigging with Popeda (at the rate of approximately 100 gigs per year in the last few years) Mustajärvi has pursued a very successful solo career that he says allows him portray a more mature side of him. To date he has released 12 solo and 3 compilaton albums and done numerous guest appearances on other artists' albums. He is also credited as having written lyrics for nearly 200 published songs. Mustajärvi writes in his mother tongue of Finnish although he is known to have recorded a song also - curiously enough - in Japanese (“Oreno ani Anton”). His latest solo album “Teillä oli nimet, ja kerran te kuljitte täällä” was released in September 2019 through his own label Turpiini Records.For more information please visit pate.fi