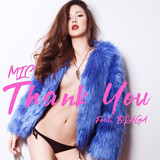 The Japanese singer MIC always had music as her greatest passion. In Nagoya the province where she was born and lived until her 23 years old she sang in some groups before she decided to move to Tokyo to go after her dreams. At the end of 2017, she met the brasilian music producer Renato Iwai resident in Tokyo, they have been working together since then. Her first and second single had a positive receptivity. The music "Aurora" produced for a TV commercial for the national TV network in Japan and the second one the music "DO" both were released by Universal Music Japan/Hyperbackers. Her third Single, "TRY" was released in Brazil with special participation of the rapper Rappin' Hood, having reached more than 200 thousand streams still in the month of launching, in addition to being won the first place in the Pop category of the largest platform of independent music in Brazil, called Palco MP3 and to have been broadcasted in several radio stations in Brazil, Japan, Europe, United States and Africa. MIC at the age of 27 is as well a singer and a photografy model for magazines and fashion sites.