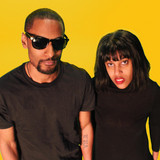 The Black Tones album title Cobain and Cornbread is a description of the band that lead singer/guitarist Eva came up with playing at a show, in answer to the most commonly asked question, “What does your band sound like?” This tasty adroitly description sums up her and her twin drummer Cedric David’s Seattle-spawned punk-blues. “Sometimes we don’t even sound like our influences,” she explains, “So the best way I found to describe The Black Tones was to talk about our environment we were raised around, which was a bunch of southerners living in the Northwest.” Louisiana-bred, though born and raised in Seattle, The Black Tones’ reference to grunge god Kurt and the Native American quick bread cuisine, evokes “Southern influences in the grey of the Northwest,” Eva says. “It sort of creates this offspring of rebellion and soul. We eat gumbo in our flannel shirts, and we eat red beans and rice while head-banging!”