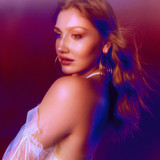 Canadian singer/songwriter Olivia Lunny delivers a dynamic breed of alt-pop, instantly infectious but full of emotional depth. After taking up guitar & writing her first song at age 12, the Winnipeg native soon ascended to national fame, earning a Western Canadian Music Award nomination for Pop Artist of the Year & scoring a Top 40 hit with her 2019 single “I Got You.” In the making her 2020 debut EP To the Ones I Loved, (which drew widespread attention, garnering millions of streams & receiving praise from the likes of Billboard, PAPER, American Songwriter, & Parade) Lunny channeled even more vulnerability into her songwriting, a quality that infuses standout tracks like “Bedsheets”—an acoustic-guitar-laced ballad hailed by Ones to Watch as “heart-wrenching.” With her recent milestones including winning the Young Canadian Songwriter Award from the SOCAN Foundation & inking her own label imprint distribution deal w/ Universal Music Canada & globally through Virgin Music, the 22-year-old artist is set to release her self-titled full-length debut. By bringing so much spontaneity to her songwriting, Lunny ultimately created a debut album that’s emotionally raw & gorgeously nuanced in its exploration of love and its many dimensions, and she hopes the songs will become part of the soundtrack to people’s experiences. “As an artist that’s all you can really wish for: to leave an imprint on somebody’s life, and let them know that someone else understands what they’re feeling.”