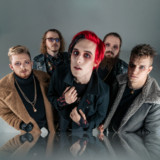 Wolf & Chain is a punk-rock-emo band hailing from Adelaide, South Australia. Jack Cumes (vocals) met Joe Butcher (guitar) at the University of Adelaide in 2017, and with a shared love for theatrical punk formed the beginnings of the band. Soon after, Harry Charles-Britton joined on bass guitar with Sam Gutwein on drums. Finally, Luke O'Dwyer joined as second guitarist and with that the band was fully formed and ready to take over. Wolf & Chain have been performing at Adelaide live music venues since 2017 doing the rounds of the local circuit. 2020 had seen the band grow significantly with the release of debut EP “An Honest Mistake” in June, with several tracks garnering radio play on triple j short.fast.loud, The Faction and Triple M Hard & Heavy among others. The EP was received to glowing reviews from Don't Bore Us, Wall of Sound, Punktastic and many others. The band seeks to bring back the emotional charge of the emo and punk scene, whilst incorporating modern and unique elements to their creative vision. Every live show from the band is full of energy and raw emotion. A pure rock n roll exorcism through pop music on steroids. The band has had huge success off the back of their debut EP 'An Honest Mistake' with two sold out Lion Arts Factory shows and national touring with sell out shows in Sydney and Melbourne, there are no signs of the band slowing down.