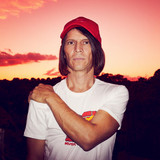 One record was all it took for Jakob Hellman to be seen as the best pop singer of the '80s and '90s; it was all it took to create the norm by which every pop singer, singing in Swedish, had to be judged, and it was all he released. After playing with some obscure bands in Falun, Hellman released Och Det Stora Havet in 1989, which included the big hit "Bara Vara Vänner." The album won him a Swedish Grammy award as Best Male Rock artist and a place in the pop history. The album was followed by a tour, and that was followed by nothing, or very close to nothing. Because even though Hellman appeared on one track of Svenska Hjärtan by the folk-rock band Perssons Pack and on two tribute albums, he did not record any new material and did not tour. And this, of course, was the source of a lot of rumors about the reason for his absence, blaming it on a nervous breakdown, drug use, or just disappointment with the pop star life. And meanwhile, the critics and the record companies started looking for the new Jakob Hellman, making the actual Hellman more and more mythic. In the late '90s, Och Det Stora Havet was elected the Best Swedish Album of all times, by a jury of critics and musicians. And still, young male artists with personal lyrics, like Håkan Hellström and Love Olzon, had to be compared to him at their debuts, none of them having much to do with Hellman or each other. What gave him this mythic position naturally was not only his sudden disappearance, but also very gifted lyrics, catchy melodies and his cautious, vulnerable appearance, which seemed inseparable from the songs. But not only looking for the new Hellman, the critics also hoped for Hellman's return. And the day before Christmas 1998, it actually happened, when he, together with the temporary constellation Skåningarna, played at a party in Stockholm. The next year saw Hellman touring under his own name, playing covers and songs from his now ten-year-old album. This was the first time he had been on the road since the debut, but no new album followed on his return. So in 2001, he was still the biggest one-hit wonder (though he actually had more than one hit) of the Swedish pop history. ~ Lars Lovén, Rovi