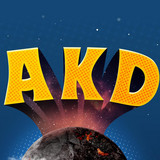 Crazy name for equally crazy, yet miraculous band. Their songs might be ironic, but always uplifting, light-hearted and humorous towards everything shallow, superficial or prejudiced. Wild imagination and creative approach allows AKD to blend Baltic, Balkan, Latino, gypsy, reggae, orchestral, polka, post-punk, and mariachi music styles into a unique concert experience. Songs tell everyday stories about miracles, relationships, lovers, fashion trends, hipsters, social media or firemen. No topic is too serious! Rising from the alternative music scene, AKD experienced breakthrough after releasing self-titled debut album in 2015. Their hit Į Venesuelą broke Lithuanian charts and even went viral in Venezuela. Two more albums, many tours and hundreds of gigs later the band in 2020 received Lithuanian music award as the band of the year, on the way collecting breakthrough of the year award (in 2016) and three video of the year awards (in 2016, 2018 and 2019) as well as various festival awards, including bronze award at Silk Road music festival in Chengdu, China in 2017. The band has toured extensively in Central and Eastern Europe, China, India, and North America. Loved by the young, the old and everyone in between in a mood for happy music and party, AKD are exceptional storytellers who take listeners to the world of their music and deliver a performance that truly stands out.