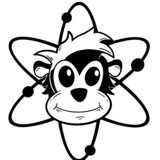 San Francisco Bay Area based electronic musician, Rich Brodsky aka Atomic Skunk, weaves together ambient field recordings, lush pads, and organic acoustic instruments with high-tech arpeggiated synths, glitchy, chaotic rhythms, and haunting melodies to create a unique psychedelic ambient soundscape. Although he played in traditional western rock bands for many years, Rich has always leaned towards the deconstruction of traditional forms. He has studied non-western music such as Indonesian Gamelan, Indian Ragas, and African drumming and counts these along with ambient artists, The Orb, The Future Sound of London, Carbon Based Lifeforms, Desert Dwellers as well as Pink Floyd and The Grateful Dead as some of his strongest influences. In early 2009, Rich released his first eight compositions as Atomic Skunk for his debut album, Binary Scenes. In early 2010, Rich released the follow-up to Binary Scenes, entitled Portal. Portal was followed up in 2011 by his next

album, Alchemy. In December, 2011, Rich released a long form ambient "single" entitled Wintermuse. As a long term Brain Tumor survivor, Rich took almost eight years off while addressing health concerns, before coming back in 2019. Base Camp was the next offering released in June, 2019, followed up with Cetacea, an oceanic musical odyssey, released in June of 2020. Rich's next album, First Shaman on Mars is scheduled for a December, 2020 release.