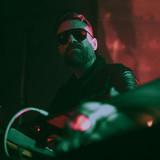 Nightcrawler began his musical career in 2012 as one of the pioneers of the synthwave scene. Because of that, he appears in the documentary The Rise of the Synths narrated by John Carpenter. Nightcrawler shares the film with another artists such as Carpenter Brut, College or Perturbator. His specialty is creating dark sonic universes combined with electronic rhythms. As a result of his perseverance and passion for music, he has published 3 studio albums and several EPS. He presented his Live show in various European capitals such as Berlin, London Vienna, Budapest Madrid or Barcelona and has played in international festivals such as Primavera Sound 2018 or the Sitges Horror Film Festival 2019, among many others. Nightcrawler is the artifece of “Genesis”, one of the synthwave hymns par excellence. It’s a song from his first album "Metropolis" and counts with the stellar collaboration of the Canadian singer Dana Jean Phoenix. It’s getting more than 2 million plays on YouTube.