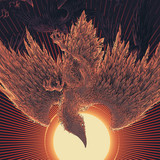 “Those who live a reality in fear that it’s not real are driven to accuse and judge people for their own beliefs. They will all be broken. For I live the reality everyone deemed to be a lie.” – I, Delusionist Once you’ve opened your eyes, you’ll never be able to close them again. This is the fate of the Delusionist. Yet, despite the burden they placed on him, he remains unbroken. How much reality can you endure? I, Delusionist is a five-piece deathcore band from Basel, Switzerland. Since the success of their first full length album “Catharsis” (2020) which features singers such as Ben Duerr (Shadow of Intent, Hollow Prophet) and Pascal Briccos (Frank Needs Help), the band is unrelenting in their endeavor to rid the world of deception. The EP released in 2021 describes the repercussions of human ignorance: “Downfall”.