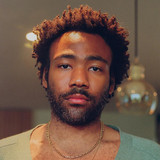 Childish Gambino is the alter ego of multi-hyphenate American entertainer Donald Glover, who is also known for acting roles on television shows like Community and the Emmy- and Golden Globe-winning Atlanta, as well as the film Solo: A Star Wars Story. As Childish Gambino, Glover refined his off-kilter brand of hip-hop on his 2013 breakthrough album Because the Internet, before making a sharp turn toward R&B-inspired funk, which won him a Grammy for Best Traditional R&B Performance in 2017 for the single "Redbone." In 2018, his politically charged song "This Is America" debuted at number one atop the Billboard Hot 100, buoyed by a viral music video that addressed gun violence and racial injustice. The success of those two projects launched him into a creative burst, which led to the release of his genre-defying, mind-bending 3.15.20 album in 2020.

While studying at NYU, Glover joined the sketch comedy group Derrick Comedy, which caught the attention of Tina Fey, who hired him in 2006 to write for 30 Rock. Three years later, he left that job to move to Los Angeles and was soon cast on the sitcom Community. The year before, he had released his first mixtape, Sick Boi, under the moniker Childish Gambino, which was conceived by an online Wu-Tang Clan name generator. His next mixtape, Poindexter, was released on September 19, 2009, the same day Community premiered on NBC. While his brainy, sometimes goofy rapping style was established by these two mixtapes, his next efforts sought to expand his reach and touch on more serious subjects. I Am Just a Rapper and I Am Just a Rapper 2 were released in quick succession at the beginning of 2010, followed a couple months later with Culdesac, a mixtape that showed off Glover's soulful singing style. All the while, he was still starring on Community, launching a successful standup comedy career, and making electronic music under the name mcDJ. Up to this point, all his music had been self-released, but that changed when he was signed to Glassnote Records in 2011. His first official album, Camp, was issued that same year. Busy as ever, Glover launched a tour that lasted into 2012, then released another mixtape, Royalty, denoting his new status as a more serious rapper and featuring a range of musicians including Beck, ScHoolboy Q, and Das Racist's Heems. Along with guesting on tracks by Kilo Kish, Chance the Rapper, Young Dro, and Kenna, his next move was to reduce his commitment to Community in order to focus more on his music and other projects, most notably a production deal with the TBS network. He left the show for good in 2013, and that same year released his second album, Because the Internet. The record featured appearances by Chance the Rapper, Jhené Aiko, and Azealia Banks, and scored Childish Gambino a Top Ten debut chart placement, a gold record, and a nomination for Best Rap Album at the 2015 Grammy Awards. Glover kept up the same determined pace, and in 2015 released a new mixtape, STN MTN (named for Stone Mountain, Georgia, where he grew up), and EP, Kauai, both of which showed him expanding his sound, with the latter featuring more singing than before. Glover's next big project was creating and starring in Atlanta, a well-received comedic drama set in the titular city. The show debuted in September 2016 and was an instant commercial success. He would direct a handful of episodes, later winning an Emmy for his directorial efforts. In addition to winning a Golden Globe for Best Television Series Musical or Comedy, Atlanta also scored Glover a Best Actor statue. In late 2016, he began dropping hints about a new album, playing a festival in California where he debuted new songs. The first taste of his new sonic direction arrived with "Me and Your Mama." It was a new sound cooked up by Glover and longtime producer Ludwig Göransson, based on deeply weird late-'60s and early-'70s psychedelic funk and soul like Sly & the Family Stone and Funkadelic. Peaking in the Top Five of the Billboard 200 upon release in late 2017, the critically lauded "Awaken, My Love!" featured Glover forgoing his trademark rap style in favor of stretching his vocal range in a variety of styles. The album's soulful single "Redbone" was also a hit, peaking just outside the Hot 100 and adding Grammy winner to Glover's resumé. Switching back to acting for a stint, Glover was featured in Spider-Man: Homecoming in 2017 and cast as Lando Calrissian in 2018's Solo: A Star Wars Story. As promotion for that film was underway, Glover hosted Saturday Night Live and performed as Childish Gambino. He debuted the trap-indebted song "This Is America," which quickly became a viral hit for its controversial music video and politically charged lyrics. The track debuted atop the Billboard Hot 100 in May 2018 and would eventually sweep the Grammys, taking home a total of four trophies for Song of the Year, Record of the Year, Best Music Video, and Best Rap/Sung Performance. Glover was seemingly everywhere that year, appearing in season two of Atlanta, while also taking on the role of Lando Calrissian in Solo: A Star Wars Story, releasing the Summer Pack EP in July and launching a tour on September. His next move was filming a movie in Cuba with Rihanna, Guava Island, which featured new music by Childish Gambino and was released in April 2019. Staying busy, as usual, Glover appeared on a 21 Savage track, headlined Coachella, and starred in the remake of The Lion King. If all that wasn't enough, he was working on another Childish Gambino record the entire time. With the production help of DJ Dahi and the musical skills of Göransson and a small band of collaborators (including Ariana Grande and Kadhja Bonet), Glover spent two years working on 3.15.20, a head-spinning collection of tracks influenced by funk, soul, psychedelia, and the cosmos that's underpinned by a strong message of social justice and Glover's flexible vocal style. After being leaked on the Internet for one night only on March 15th, it was issued for real a week later. ~ Tim Sendra & Neil Z. Yeung, Rovi