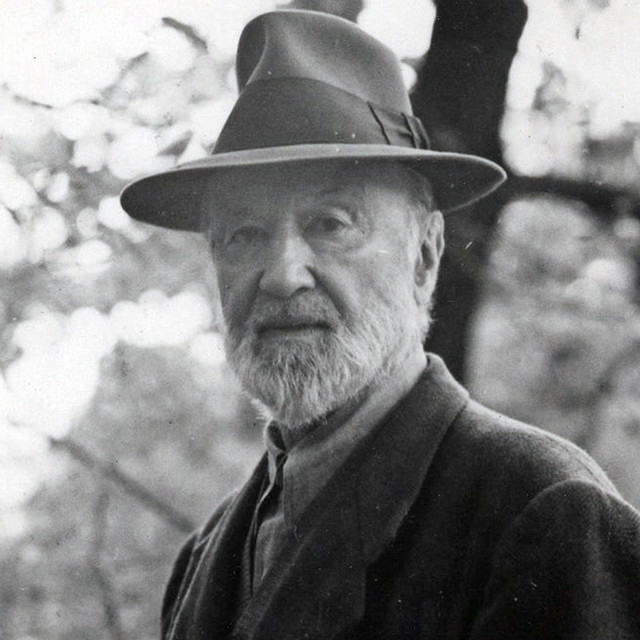 Charles Ives was the son of George Ives, a Danbury, Connecticut bandmaster and a musical experimenter whose approach heavily influenced his son. Charles Ives' musical skills quickly developed; he was playing organ services at the local Presbyterian church from the age of 12 and began to compose at 13. Ives' rural, rough-and-tumble childhood was revisited vividly and repeatedly in the music he composed as an adult. In 1894 Ives entered Yale to study music, and his father died at age 40 from a heart attack. Professor Horatio T. Parker was not at all interested in encouraging Ives' experimental style. Ives dutifully learned the basics, creating an interesting but conventional Symphony No. 1 as his graduation thesis in 1898. After barely managing to earn his diploma, Ives moved with a couple of his fraternity buddies to an apartment in New York City. He became organist at Central Presbyterian Church and composed his first large-scale attempt to reflect the spirit of America, the Symphony No. 2. In off hours Ives worked on his wild, highly dissonant and ragtime-influenced Piano Sonata No. 1, making a din that his roommates described as "resident disturbances." In 1902 a friend introduced Ives to the insurance agent Julian Myrick. They co-founded the first Mutual Life Insurance office in Manhattan. Through his hard work and easy ability to communicate with customers, Ives would become a very wealthy insurance executive. In 1906 he married Harmony Twichell, a woman from a prominent New England family. Ives continued to compose his music on commuter trains, in the evening, and on weekends, writing what pleased him without worrying what the outside world might think of it. In order to check details of orchestration, Ives hired out theater orchestras to rehearse his scores. In 1910 Ives gave New York Philharmonic conductor Gustav Mahler a score and parts to his Symphony No. 3, "The Camp Meeting." Mahler tried it in rehearsal after returning to Vienna, but died before he could perform it. In the 1910s, Ives would produce several of his most important masterworks, the Symphony No. 4, the Orchestral Set No. 1: "Three Places in New England," the String Quartet No. 2, and the massive Piano Sonata No. 2, "Concord, Mass., 1840-1860," commonly referred to as the Concord Sonata. With the beginning of America's involvement in World War I, Ives raised funds for the war effort, supported an unsuccessful constitutional amendment prohibiting a declaration of war without the support of two-thirds of the populace, published a manual (Surveying the Prospect) that for years served as a bible for the insurance industry, and composed at an astounding pace. In October 1918 Ives suffered a severe heart attack that nearly killed him. In 1921 he published the Concord Sonata and in 1922 followed it with 114 Songs, containing songs dating from 1888 to the eve of publication. These editions were sent out free to anyone who wanted them, and many copies wound up in the wastebaskets of music conservatories. In 1924 pianist and new music enthusiast E. Robert Schmitz made an appointment with Ives to buy insurance, but left instead with a copy of the Concord Sonata. He introduced the work to Edgard Varèse and to Henry Cowell, who became Ives' strongest advocate. Soon Ives' music began to appear on concert programs, and when Cowell launched his New Music Quarterly in 1927, Ives helped back the project financially. But that same year Ives confided to Harmony that he'd somehow lost the gift that compelled him to write music. In 1930 Ives and Myrick both decided to retire, and from this time forward Ives concerned himself with revising existing works. Ives' eyesight was beginning to deteriorate, so he had huge Photostats made of his scores and also made recordings to work from. Composers Cowell, John J. Becker, and Lou Harrison helped Ives create legible scores of his music, instituting a scholarly tradition of Ives editing that continues to this day. In January 1939, pianist John Kirkpatrick performed the complete "Concord" in a recital so successful that even critics distrustful of modern music gave it rave reviews. In 1947 Ives was awarded the Pulitzer Prize in music for his Symphony No. 3, completed nearly 40 years earlier. With Ives' death in May 1954 his musical legacy became top priority for a generation of biographers, researchers, and performers. Ives' early works expertly channel European influences into totally fresh constructs; mature works make use of quotation, collage techniques, spatial redistribution of instrumental groups and soloists, metric modulation, homegrown forms of pitch organization and dense, massed blocks of clustered chords. The difficult idiom of many of his pieces has denied Ives the mass appeal of Copland and Gershwin, and he can be an acquired taste. Some critics and conductors, mainly European, discount the value of his innovations, concluding that Ives was an amateur who didn't know what he was doing. By the turn of the twenty-first century renewed researches into Ives' theoretical approach revealed that he certainly did know what he was doing, and he has much to teach us yet today in terms of fresh ideas and techniques.