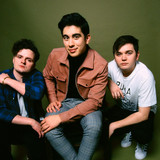 Known for their uplifting live shows, The Happy Fits have stayed busy over the past year away from touring by live-streaming performances for fans around the world and making music videos for every song on their 2nd LP What Could Be Better. On their new single Another Try, premiered on SiriusXM’s Alt Nation, the trio reveals a bolder new direction. Inspired by the repetition of quarantine, the song finds the band beaten down but not defeated, holding space for unease without losing sight of their signature optimism. Sure to resonate with listeners, Another Try also takes the band into more synth-forward territory, citing White Lies as an inspiration; ABBA and The Cars have also been on their minds. Cold Turkey is the sunnier of the two A-sides featuring a lush orchestral arrangement. The Happy Fits started as a casual summer project for longtime friends Calvin, guitarist Ross Monteith, and drummer Luke Davis before starting college. After their debut EP Awfully Apeelin' took off on Spotify during their first semester, they dropped out to record their 2018 first full-length Concentrate.   Contact - info@diamondcitymgmt.com