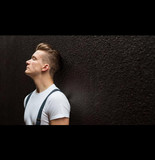 Beau Boulden is a solo artist from West Sussex, England. Previously receiving huge support from BBC Introducing South, Sussex solo artist Beau Boulden returns with ‘Unfold’, a track that truly welcomes us into his world. Already proving the breadth of his musical versatility via the rhythmically driven debut ‘Talk to Me’, and the heartfelt ‘You Will Always Be’, with this new release Beau is bringing a sound that isn’t typified by genre. Speaking about new release Unfold, Beau says: “Unfold is a song about the process of trying to accept a feeling you cannot seem to change. Sometimes it seems like the right way to be feeling, but you know, deep down, it will never end up being good for you. You know that it's wrong but you have almost lost yourself within your own powerlessness; you have started to unfold.” During lockdown, Beau has used this time as a means to find different ways of being creative, with the artwork being a self-painted image which visually represents what OCD means to him. "I immediately felt a link between the artwork and 'Unfold'. I'm really enjoying being able to explore another creative outlet that I can use to contribute to my music. I love all forms of art and to be able to visualise and further express the feeling of my music, through another medium, is something I’m really excited about." Beau Boulden’s new single ‘Unfold', which is produced & mixed by Chris Coulter (Decimal Studios), is out now across all major platforms!