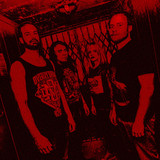 NEST OF PLAGUES is a band formed in July of 2014 in Budapest, Hungary. The band mixes heavier genres of metal like death metal, deathcore, groove metal, metalcore with different techniques of growling and melodic screaming/singing. The band also uses melodic guitar harmonies and a lot of sampler/keyboard and other electronics. Their first full-length album 'End of the Comedy' was released in January 2018. In 2019 and 2020 they have been writing new materials for next full-length album. Since then three singles have been released: Memento For Her Deeds, Choke and Megalomania. The release of next LP can be expected in late 2021.