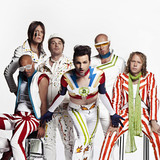 With an image built on '70s glam rock costumes and big gestures, combined with catchy radio-friendly songs, the Ark had a major breakthrough in Sweden in 2000. Before that, few had heard of the band, even if it had been around since 1991, when it was formed by singer Ola Salo, guitarist Jepson, bassist Lasse "Leari" Ljungberg, and drummer Olsson. As a local band, they played small concerts and minor festivals through the '90s, and their EP Racing with the Rabbits got catastrophic reviews, if any. In 1997, the band was close to breaking up but was contacted by Robert Jelink, who had sung with the Creeps. Jelink managed to get the Ark a record deal, and with backing from Grand Recordings and the new members Martin Axén (guitar) and Sylvester Schlegel (drums), the quintet moved to Malmö. In 2000, the Ark played warm-up for Kent on a nationwide tour, and later that year released the single "Let Your Body Decide," which became a big radio hit. The next single, "It Takes a Fool to Remain Sane," was even more successful, and when the debut album, We Are the Ark, was released in the autumn, it won two Grammy Awards and sold very well. In the press, the Ark was often said to represent the return of glam rock, but while the clothes definitely had a '70s connection, the music had less to do with it. Their next album, In Lust We Trust, continued their success and sparked hits in singles "Father of a Son" and "Calleth You, Cometh I," the former song also causing some controversy as it addressed homosexual adoption rights. Salo, however, still wasn't totally satisfied with the band's sound and wanted to really mix things up (and make people dance!) for the Ark's third album. Consequently, he took over creative control of the band and got together with their unofficial sixth member, Jens Andersson; the duo hooked up with film music composer Nathan Larson and sound engineer Per Sunding to accomplish Salo's desire of making rock music with more of a disco beat. Recording took place during most of 2004 and the Ark issued the resulting album, State of the Ark, by December. Its first single, "One of Us Is Gonna Die Young," quickly climbed the Swedish charts, and the album followed suit in the beginning of 2005. A year later, Andersson was officially a member of the band, manning keyboards. ~ Lars Lovén, Rovi