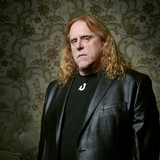 You think you know someone, and then you realize that there’s more than meets the eye. Grammy Award winning artist Warren Haynes has been recognized as a cornerstone of the American music landscape and revered as one of the finest guitar players in the world. Throughout his prolific career as part of three of the greatest live groups in rock history – Allman Brothers Band, Gov’t Mule and the Dead – his virtuosic artistry has led to thousands of unforgettable performances and millions of album and track sales. Despite all of the ground that Haynes has covered on his musical journey, the impressive thing is that he still has many miles to explore. On his newest solo album Ashes &amp; Dust, he puts forth one of his most gorgeous, musically rich and personal albums to date. It is endlessly exciting to see one of the most brilliant minds in modern music shine an entirely new light on the depths of his creativity. Ashes &amp; Dust, only the third studio album Haynes has ever released under his own name, is a masterful work of art and a particularly important statement for Haynes. The songs are immediately and clearly different from his usual style – encompassing beautiful acoustic arrangements, a rootsy/Americana soundscape and honeyed vocals that cut straight through to the soul. Although many of these songs are brand new, some of the tunes that make up this album have been dear to Warren for years.<br>