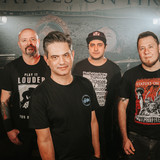 STATUES ON FIRE release their new album name “Living in Darkness” in May. The band was formed in São Paulo, Brasil in 2013 with ex-member of Nitrominds and Musica Diablo (Metal Project with Derrick Green from Sepultura). They released 2 albums, debut album “Phoenix” came out in 2014 on vinyl, with two tours in Europe following (2014/2015) and The second record,“No Tomorrow“ released in 2016 , with also two tours in Europe following (2016/2018). The upcoming album tour was in May 2019. The album Phoenix had a huge impact when it was released, sometimes metal, most of the time melodic core/punk rock and

got elected one of the best independent album of the year (2014) in Brazil. Most often used references are bands like Propagandhi and Strike Anywhere. ‘‘Living in Darkness“ proves the band's development of their own punk rock style, you can hear catchy and powerful songs combined with heavy riffing and great songwriting. The lyrics are based on their view of society, politics and human relationships, the album title explains itself. You gonna hear tons of SG, Flying V