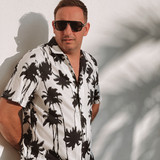 Award winning DJ & Producer Paul Hutchinson started DJing in 1988 and his passion for House & Disco has never been so strong. Quote: “I get such a buzz from seeing people dancing and smiling, there is no better feeling in the world than seeing people dance to the music that you select”. When you see Paul behind the decks his passion shines through. Paul has played around the Globe including Miami, Ibiza, Madrid, Barcelona, London, New Zealand and various places around the UK and DJ’d in some prestigious clubs including Pacha, Joy Madrid, Es Paradis, Bora Bora, Eden, Savannah, Ibiza Rocks, Digital Newcastle to name just a few. In 2016 Paul introduced his own brand “Mi Casa Es Tu Casa” on to the house scene and has since built a big following in his home county of Essex and took his brand to Ibiza for the summer of 2018 with a weekly party at iconic Superclub Es Paradis. That same summer Paul held residencies at Tulp and Ibiza Rocks Bar and has played regular gigs on the island since 2010.