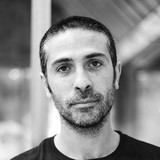 Fabio Della Torre aka Corcos is an Italian DJ/producer from Florence. A leading figure in Italy’s electronic music scene, Della Torre is the brains behind Bosconi, one of his country’s most esteemed house music imprints. Alongside Ennio Colaci, Della Torre also produces as one half of production duo, Minimono, themselves veritable purveyors of discerning electronic music. Della Torre’s DJ career began in earnest at Florence’s infamous Tenax club back in 1995. Since then he has appeared in practically every Italian nightclub of note, as well as a range of global institutions, with Panorama Bar, Concrete Paris, Tresor, DC10, Rex Club and Flash DC among those who have played host to his unique sound. Fabio’s association with Tenax is still well and truly alive today, as these days he DJs at the club as a monthly resident. As likely to spin deep house as he is minimal techno or more up-tempo funk numbers, Della Torre’s passion and unpredictable nature is a hallmark of his extensive DJ style. From a production perspective, Fabio’s solo works have appeared on the likes of Concrete Paris, Vibraphone, Robsoul, Inner Balance, Telegraph, Tuning Spork, Tenax and Oslo, while Cabanne, Marcel Fengler, Regen, Jay Haze, Eduardo De La Calle and Scott Grooves are among those who’ve remixed his work. Never one to pander to obvious trends or sounds, it’s with good reason that Fabio Della Torre is renowned as one of Italy’s finest electronic music exports. <br>