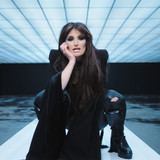 With a bright, commanding soprano voice recognized the world over for the Oscar-winning song "Let It Go," Tony Award winner Idina Menzel originated roles in Broadway's Rent (1996) and Wicked (2003) before bolstering her screen resumé with work including the film adaptation of Rent (2005), TV's Glee (2010-2013), and the Disney animated films Frozen (2013) and Frozen II (2019). Also a singer and songwriter in her own right, she has maintained a parallel recording career, making albums that bridge adult alternative, vocal, and contemporary pop. Raised in Syosset, New York, Idina Menzel started voice lessons at the age of eight, later finding work singing at weddings and bar mitzvahs while in high school. She went on to study at New York University's Tisch School of the Arts, earning a B.F.A. in Drama in 1993. Her big break came when she was cast as Maureen in the rock musical Rent in 1995, her first professional theater role. A version of Puccini's opera La Bohème set in New York City's East Village in the 1990s instead of 1840s Paris, the show opened on Broadway in April of 1996 and went on to win four Tony Awards including Best Musical. Menzel was nominated for a Tony in the Featured Actress category. She left the cast of Rent in July 1997 and recorded her first solo album. A set of original adult alternative songs co-written with bassist Milton Davis, Still I Can't Be Still was released by Hollywood Records in 1998. While continuing to appear in shows off-Broadway, Menzel made her feature-film debut with a small role in Kissing Jessica Stein in 2001. She was then cast as a lead in the Broadway musical Wicked, originating the role of the Elphaba opposite Kristen Chenoweth's Glinda. After opening at the Gershwin Theatre in October 2003, Wicked was nominated for ten Tony Awards; Menzel took home the Tony for Best Leading Actress in a Musical in 2004. That same year, she self-released the EP Here, the follow-up to her debut. Still juggling a recording career with work on-stage and on-screen, Menzel appeared off-Broadway in the Michael John LaChiusa musical See What I Wanna See in 2005, then reprised the role of Elphaba for the West End premiere of Wicked at London's Apollo Victoria Theatre in 2006. The following year, she could be seen on the big screen as Nancy Tremaine in the Disney live action/animated film Enchanted, and a dance version of Wicked's "Defying Gravity" became her first club hit. In 2008, Warner Bros. released her second solo full-length, I Stand. That year, she also appeared alongside Josh Groban, Rent's Adam Pascal, and others in Royal Albert Hall performances of Benny Andersson and Björn Ulvaeus' Chess in Concert. A cast album was issued by Reprise in 2009. Menzel released a self-titled EP via the same label in 2010 that combined studio and live recordings. In 2010, she began a recurring stint as Shelby Corcoran on the hit musical-comedy series Glee. Menzel's PBS special Live: Barefoot at the Symphony captured a 2011 performance with the Kitchener-Waterloo Symphony conducted by Marvin Hamlisch. It aired in 2012 and received a CD and DVD release by Concord Records. In the meantime, Menzel was cast as the speaking and singing voice of Elsa in the Disney animated musical film Frozen. The film became an international blockbuster after opening in late 2013. Penned by the songwriting team of Kristen Anderson-Lopez and Robert Lopez and performed by Menzel, the soaring "Let It Go" reached number five on the Billboard Hot 100. It went on to win the Oscar for Best Original Song and a Grammy for Best Song Written for Visual Media. Menzel followed the winter-themed film musical with a seasonal album called Holiday Wishes. It arrived via Warner Bros. Records in October 2014 and not only became her first Top 50 solo album but climbed all the way to number six on the Billboard 200. She then returned to Broadway in the lead role of the Tom Kitt-Brian Yorkey musical If/Then, about a divorcée who moves to N.Y.C. for a fresh start. It earned Menzel another Tony nomination for lead actress in a musical. Still portraying Elsa in Disney shorts such as 2015's Frozen Fever, Menzel returned to the studio for her third studio LP of original songs, titled idina. It reached the Top 30 of the Billboard 200 upon its release in 2016. She and Nia Long took the lead roles in the Lifetime TV remake of Beaches, which aired in early 2017. It was followed by a soundtrack release on Warner featuring performances by Menzel. The two-disc idina: live arrived on Arts Music in 2018. A year later, she issued her second holiday-themed album, the Billboard 200-charting Christmas: A Season of Love, which included guest spots by Billy Porter, Josh Gad, Ariana Grande, and others. The following Christmas, she released the EP A Season of Love: Songs for the Stage. ~ Marcy Donelson, Rovi