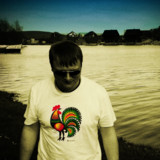 Born in Wroclaw, Poland. RiMiNiO composes electronic music for years. As a teenager RiMiNiO took piano, accordion and trumpet classes in a State School of Music. At the beginning he fascinated with classical, rock and jazz music. Then he felt in love with electronic music inspired by early Jean Michel Jarre productions and other artists like Mike Oldfield, Alphaville and Depeche Mode. He started out with his home computer and basic midi keyboard, making some tunes for the polish demoscene. In the age of 17 he composed many

jingles and background music for popular local TV ads. After years of composing mainly for himself and after completion of home studio full of analog gear, RiMiNiO decided to go global and share his musical creativity with more people. In 2010 he launched his first singles: "The Circle", primarly composed in 2004 and "Beating the clock". In 2013 RiMiNiO won a remix competition held in San Francisco and after that was hailed as "polish best kept secret of electronic music" and underground talent. In 2019 RiMiNiO has finally released his first album called "ONE". Actually, in his creations RiMiNiO prefers styles of Trance, Ambient, Chillout, Electro-house, Minimal, Fusion and Experimental.