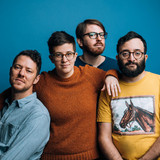 Mount Sharp began on a rooftop in Brooklyn, or on a boat in Maine, or perhaps somewhere in between. Either way, the band grew around the bittersweet, poetic songwriting of Swood (Sarah Wood) paired with Bryan Bruchman’s noisy, chaotic tendencies around 2012. On 2014’s WEIRD FEARS EP (with the rhythm section of Ryan Zumsen and Maia Macdonald), the band exhibited a blast of unbridled energy, excitement, and confusion - a fitting soundtrack to a brief blissful, carefree time before so much changed. The band - now with Sal Garro and Jonathan Pilkington Kahnt firmly holding down the drums and bass - has matured, and the songs are maybe a little more serious, maybe a little more reflective, but no less cutting and catchy. Taking inspiration from the cosmos, sci fi tv, and the messed up state of the world, Mount Sharp puts all the feels into song.   Twitter: @HelloMountSharp Insta: @MountSharp Band portraits by Ebru Yildiz.