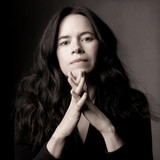 Over her 40-year career Natalie Merchant has earned a place among America’s most respected recording artists and earned a reputation for being a songwriter of quality through her nine albums as a solo artist and six albums as the lead singer of the group 10,000 Maniacs with Elektra and Nonesuch Records. Merchant has toured extensively and collaborated with a diverse array of artists on stage and in the studio including:

Billy Bragg, Philip Glass, David Byrne, The Chieftains, Tracy Chapman, Mavis Staples and Ladysmith Black Mambazo. Though-out her entire career Merchant has been dedicated to supporting a variety of non-profit organizations by lending both financial support and raising public awareness. Scenic Hudson, Riverkeeper, Association to Benefit Children, The Fresh Air Fund,The Center for Constitutional Rights, Doctors Without Borders, Tibet House, Greenpeace, and Planned Parenthood are among the social justice groups to which she has been devoted. In 2007 Merchant served a five-year term on New York State Council on the Arts (NYSCA). In 2013 she spearheaded an effort to stop the advance of hydraulic fracturing in New York State with a concert-protest film, Dear Governor Cuomo. Merchant used the same format to address the domestic violence crisis in the Hudson Valley with Shelter(2014).She is currently artist-in-residence with Head Start, developing a music and movement curriculum for pre-school aged children in The Hudson Valley.