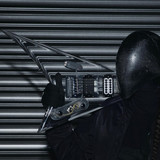 ☼ Heavy synths, space like soundscapes, fragiles voices and distorted guitar explosions. That's Carbon Killer. ☼ Carbon Killer is a cross media project mixing music and video in a dark cyberpunk aesthetic. Sometimes Post-rock/Dark synth, sometimes sweet and Synthpop. After numerous years spent playing in post-rock, stoner or fusion projects, the man behind Carbon Killer started this project in late 2016. He collaborated with Theo Begue from Hypno5e and Adrien Tisseraud from Taylorythm to put this project all together and play live. In solo and trio formations, Carbon Killer has played with Carpenter Brut, Perturbator, Volkor X, Anoraak, Timecop1983, Sung, VHS Dreams, Neoslave, but also Humanity's Last Breath, Dan Terminus, Fakear, Lazerpunk, We Are Magonia, SIERRA among others... The first EP, Carbon Inc is available on Lazerdiscs Records since March 2018. Midnight Mass, a live album, was release in November '18. The latest release, Divided We Fall is a compilation of rarities, b-sides and remixes initially release as a secret gift for early fans, but was publicly released in the end, during the 2020 COVID crisis. During this time, the band played more than 70 shows, in 15 countries, in a year and half. And it's not over ! Listen to the complete Carbon Killer discography through this playlist : Carbon Killer (full discography) Follow the project on social networks with @crbnkllr http://facebook.com/crbnkllr http://instagram.com/crbnkllr http://twitter.com/crbnkllr