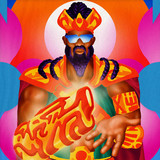 Making the world smaller by making the party bigger: this is Major Lazer's mission. Since its debut in 2009, the trio led by Diplo has consistently affirmed its desire to celebrate cultures, to uplift artists and genres from around the world and to create a new kind of electronic music. The breadth of international artists that we find across Major Lazer’s albums—from Guns Don't Kill People...Lazers Do, to their latest Music Is The Weapon—illustrates this ethos. This desire to free oneself from codes, to break down barriers, is at the heart of Music is the Weapon. Released in October 2020 this new LP is carried by a list of prestigious names, with universes that could not be more varied. Among them: reggaeton superstar J. Balvin, American rap queen Nicki Minaj, in addition to French Montana, Skip Marley, Khalid, Mr Eazi, Nucleya, Paloma Mami, Anitta, and Shenseea , the new star of Jamaican dancehall and many more.. By drawing together the international influences of reggaeton and afrobeats, Music is the Weapon is a record in tune with its time, whose frenetic rhythms marry genres with ever more power; dance music to dancehall, pop to dembow, soca to hip-hop. It is an album that projects us to the four corners of the globe, and whose title takes on an almost political meaning: at the end of a year marked by isolation and the restriction of our freedoms, music seems to be a considerable weapon, more capable than ever of bringing us together across borders.