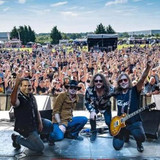 Samarkind, based in Dublin Ireland are a hard rock band currently touring the Uk and Europe. The critically acclaimed album available here on Spotify has seen the band invited to play all over the Uk and Europe, If you like your Hard Rock with a bluesy swagger then you have arrived. Influenced by the monster rock of the 70's and 80's Samarkinds debut album has wow'ed worldwide.David Paul Byrne on vocals, Michal Kulbaka on guitar, Mark Dempsey on bass and Darragh O'Hehir on drums, Samarkind have been rockin stages allover the Uk , Ireland and Europe. Catch them near you soon!!