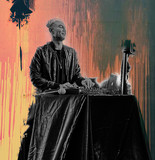 After many sleepless nights dancing to the acid house and techno house sounds of the mid 90’s, Julien fell under the spell of masterful DJ’s like Richiew Hawtin, Derrick May and Derrick Carter. Late nights were all about dancing and listening to the techniques, programming and mixing styles of the experienced DJ. At the age of 17, Julien started making mix tapes for friends. The early mix tapes led to dj sets at house parties and one off events, which eventually opened the doors to Julien’s first club gig. A true DJ at heart and in the soul, Julien began making waves in his home city with residencies at the world-renowned Guvernment and Toronto after hours favorite, Comfort Zone. His diverse music selection combined with a magnetic charisma behind the decks, has moved dance floors from New York to Ibiza, Mexico to Miami, and beyond.