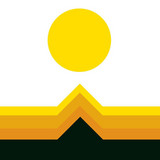 Snake Oil was established in 2011 by Jason Labbe and began as a collective of over a dozen musicians, living all over the country, who used home recording technologies and file sharing to collaborate on three hard-to-categorize instrumental releases: a self-titled LP, a 7” EP, and a second LP titled The Train is White and the Moon is Strong. Over the next several years, a core line-up of musicians emerged and Snake Oil regularly took to the stage, sharing bills with bands as diverse as Mates of State, Acid Mothers Temple, and Deerhoof. After a short hiatus, Snake Oil has come back with a new line-up and a new full-length LP, Dying of Sunsets, on Safety Meeting Records. Departing from their usual recording process, the new LP was tracked live to 2” tape at Brooklyn’s Seaside Lounge by Charles Burst and Jason Labbe. This record also marks a drastic stylistic change for the band: the new material features vocals by keyboardist Emily Lee (Shearwater, Loma, Stephen Brodsky) and new guitarist Kelly L’Heureux (Atrina). Their vocally-driven arrangements act as compliment and counterpoint to the fuzzy psychedelic instrumentals, continuing to draw on influences ranging from Sabbath to CAN to Bitches Brew.