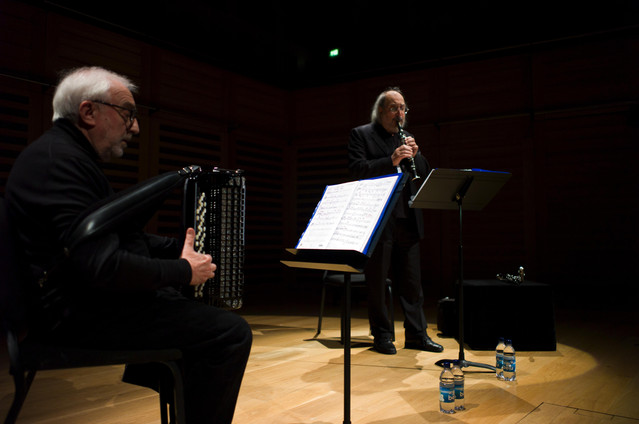 Multi-reedist and composer Gianluigi Trovesi is a major force in the modern Italian jazz scene, having led his own recording dates and been an integral part of the all-star Italian Instabile Orchestra. Emerging first as teacher, Trovesi quickly established himself a formidable talent, winning the "RAI TV National Competition for Saxophone and Clarinet" in 1978, and earning the Critics' National Prize that same year for his debut album, Baghet. From there, he found work playing with a bevy of leading European avant-garde artists including Giorgio Gaslini, Manfred Schoof, and Conrad Bauer, to name a few. Since leaving teaching behind for good in the '80s, he has continued his highly regarded work, recording with Misha Mengelberg, Enrico Rava, Anthony Braxton, Louis Sclavis, and many more. Widely recognized as a leader in Italian jazz, he has earned several accolades, including being named the Ufficiale della Repubblica Italiana, and being bestowed the Chevalier de l'ordre des Arts et des Lettres. Born in 1944 near Bergamo, Italy, Trovesi studied harmony and counterpoint with Maestro Vittorio Fellegara, earning his degree in clarinet in 1966. Trovesi performed all kinds of music, from classical to dance to jazz, establishing himself as a soloist. In 1977, he became a member of the Giorgio Gaslini Quintet and formed his own trio that focused on blending jazz improvisation and Italian folk music. In 1978, Trovesi taught clarinet and saxophone at the conservatory in Milan, won the "RAI TV National Competition for Saxophone and Clarinet," and received the Critics' National Prize for Baghet, his first LP. The following year he taught in Stockholm, and then began his 14-year tenure as first-chair alto saxophonist of Milan's RAI TV Big Band. 1982 saw Trovesi's time with the Gaslini Quintet come to an end. The next year he began a three-year teaching stint at the conservatory in Brescia, and received the RAI RadioUno Jazz Prize. Trovesi continued to teach privately, and also served as a member of the Siena National Jazz Seminars teaching staff. Starting in 1984, Trovesi began a project that continued into the early '90s called "Les Boìtes a Musique." It was a series of live performances that included pre-recorded tapes and electronic processing by L. Mirto and eventually percussionist Tiziano Tononi. In 1991, Trovesi joined the Italian Instabile Orchestra, a conglomerate of some of the best players in Italian modern creative jazz that went on to record many outstanding albums for Leo Records and ECM. That same year, he founded the Gianluigi Trovesi Octet, which mixed jazz with folk musics and European classical. Trovesi also co-led a band with Paolo Damiani called Roccellanea. Over the years, Trovesi has toured extensively and performed at festivals and venues across Europe, the Middle East, India, and North America with the Giorgio Gaslini Quintet, the Gianluigi Trovesi Octet, the Italian Instabile Orchestra, and other bands. He has also received many prestigious awards, such as Best Italian Musician in Musica Jazz's 1988 and 1992 competitions and Best Italian Group, awarded to his Octet in 1992 and 1996. Several of his albums were voted Best Italian Disc, including Dances (1985), From G to G (1992), an album that also garnered Down Beat magazine's highest rating of five stars, and Les Hommes Armés (1996). He has toured, recorded, and performed with countless renowned improvisers, jazz musicians, and musical experimenters, including Anthony Braxton, Misha Mengelberg, Steve Lacy, John Carter, Han Bennink, Mark Dresser, Tony Oxley, Günter Sommer, Horace Tapscott, Evan Parker, and Kenny Wheeler. Toward the end of the '90s, Trovesi was active in a touring duo with Gianni Coscia, called Radici, and in a trio with Patrick Vaillant and Riccardo Tesi. The beginning of 1999 saw the release of his stunning Around Small Fairy Tales on the Soul Note label. He continued to release a fascinating series of albums in the 21st century, including In Cerca di Cibo on ECM and Round About a Midsummer's Dream on Enja (both in 2000). Since then, many of his albums have been on ECM including Fugace (2003), Round About Weill (2005), Vaghissimo Ritratto (2007), and Profumo di Violetta (2008). In 2011, Trovesi paired with accordionist Gianni Coscia for yet another well-received ECM date, Frere Jacques: Round About Offenbach. The following year, he joined Ensemble FisFüz for Papillons. He then collaborated with Israeli pianist Anat Fort for Birdwatching on ECM. In 2018, he delivered Mediterraneamente, a quintet date featuring guitarist Paolo Manzolini, bassist Marco Esposito, drummer Vittorio Marinoni, and percussionist Fulvio Maras. ~ Joslyn Layne, Rovi