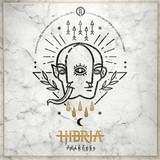 Traditional power metal band Hibria hails from Brazil's southernmost major city of Porto Alegre, where they dwelled in relatively obscurity since as early as 1996, the odd demo tape offering the only proof of their existence. Well good things come to those who wait, apparently, as by the release of the group's debut album, Defying the Rules, in 2004, vocalist Iuri Sanson, guitarists Diego Kasper and Abel Camargo, bassist Marco Panichi, and drummer Sávio Sordi had refined their talents to a razor-sharp point, making it one of the most universally praised power metal debuts of the year. ~ Eduardo Rivadavia, Rovi