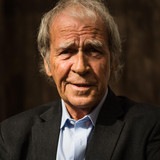 Finbar Furey has left his mark on the music of Ireland for more than five decades. As lead singer, 5 string banjo & uilleann pipes player for The Fureys, a group he shared with his brothers Eddie Furey Paul, & George, Furey helped to guide the evolution of Ireland's traditional music. Since leaving the band to pursue a solo career in 1997, Furey has continued to attract attention with his gutsy approach to music. His debut solo album,

The Wind and the Rain in 1997 was followed by the recording in London of a concert with Finbar accompanied by the BBC Concert Orchestra ‘We Dreamed Our Dreams: A Celebration of St. Patrick's Day’, in early 2001. In 2003 Finbar released ‘Chasing Moonlight’, and in 2007 Sony released ‘No Farewells, No Goodbyes’. A man of many talents, he added 'actor' to his list of credits, with roles in Gangs Of New York (2002), 'Strength and Honour' (2007) & Scottish short film ‘Paris/Sexy’ (2010), followed by the hit RTE series, ‘Love/Hate' (2011). Finbar gained Number 1 spot in the Irish Charts in 2013 with his 'Colours' album, featuring THE LAST GREAT LOVE SONG. In 2016 he wrote & played music for the film The Wild Goose Lodge, & released his instrumental pipes & flute album,