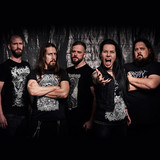 CRITICAL MESS are a dedicated and ambitious 5-piece death metal newcomer from Hanover, Germany with only one goal in mind: conquering the stages across the globe, bringing extreme music to every corner of this infested, slowly rotting planet. The year 2018 had already proven to be the beginning of one hell of a ride for the band: they signed to the label Metalville, released their debut Human Praey internationally on March 30th and played two European tours with headliners Six Feet Under

and Sinsaenum. On June 21st 2019 CRITICAL MESS released their second full-length studio album "Man Made Machine Made Man". Shortly after the release, they commenced on their first Festival Summer, playing festivals such as Wacken Open Air and MetalDays, amongst others. They left behind a blazing trail of fire and made a big first impression on thousands of metalheads all over Europe. Influences range from Dying Fetus, Malevolent Creation, Cannibal Corpse, Aborted and Napalm Death to Decapitated, Gojira, Meshuggah and Soreption. Crank the volume and feast your ears on skull crushing riffs, insane vocals, fierce harmonies and drum chops that will put any industrial slaughterhouse soundscape to shame.