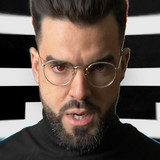 A very distinct, modular, powerful voice, and a wild guitar play. Tsuko G. is a french musician, singer and producer from Paris, France. From his early teenage days, Tsuko developed a strong musical sensitivity and love for Pop, Rock, Metal and Electro. He started learning guitar when he was 8, and music theory starting middle school. However, he made his studies in science, and went to a renown engineering school. In his spare time, he started learning music production from the big names in the industry such as Fab Dupont (Shakira, Jennifer Lopez…) and Greg Wells (Twenty One Pilots , OneRepublic…). In 2015, he started a YouTube channel on which he made covers of video games and anime music, and met a big, unexpected success from it. He then became an embedded systems engineer and started working for one of France’s biggest companies. He later resigned from his job to pursue his dreams: he is now the head of his recording studio in Paris, France, and he started producing his very own songs. Tsuko has a strong following on YouTube and Twitter, and is very well known for his covers on the internet, notably for Déjà Vu which made over 15,000,000 plays on Spotify and over 2,000,000 views on YouTube, among many others.