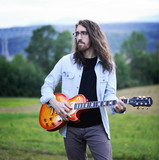 A blend of powerhouse vocals, poetic lyrics, and melodies to soothe the soul... Finding solace in his songwriting, Logan Callahan crafts emotional soundscapes that explore the complexities of love and loss. With deep introspection, using music as his outlet, he touches on the often melancholic and forlorn underpinnings of society, yet maintains a spirit for all that is possible. Through subtle, emotive guitar work and his voice swelling from a croon to a wail, he seeks to overcome the dragging thoughts that cloud many of us. With influences ranging from Chris Cornell to Jeff Buckley, Alice In Chains, Prince, Ian Flanigan, and a hint of Justin Timberlake, listeners are sure to be engaged as Callahan weaves through a multitude of sonic environments. With a passion for singing from a young age, Logan is no stranger to performance. Beginning piano lessons at the age of 6, he lent his talents to many musical acts throughout high school and college. In late 2013, he began to teach himself guitar and pen music of his own. Various life experiences led to the 2017 release of his debut solo album All My Mistakes which garnered generous reviews. Father of Cups, the 2020 debut release from Whiteford & Callahan, is a passioned and intimate piece of storytelling that explores the duo's versatility. Heavily influenced by classic rock icons, their powerful and dynamic vocals deliver a sense of nostalgia that soars over their lush, modern production.