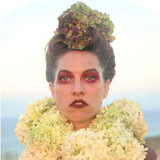 Amanda Palmer has announced the eagerly-awaited release of her first solo album in more than six years. THERE WILL BE NO INTERMISSION is now available in multiple formats on www.amandapalmer.net .

Somber yet exultant, THERE WILL BE NO INTERMISSION presents still more dimensions to Amanda’s already voluminous talent, once again confirming her as a master songwriter at the height of considerable power. Amanda Palmer is a singer, writer, pianist, activist and blogger who simultaneously embraces and explodes traditional frameworks of music and art. She first came to prominence as one half of the punk cabaret duo, The Dresden Dolls, earning global applause for their theatricality and inventive songcraft. Her solo career has proven equally brave and boundless; THEATRE IS EVIL, debuted in the top 10 SoundScan/Billboard 200 upon its release and remains the top-funded music project on Kickstarter. In 2013 she presented The Art of Asking at the annual TED conference, which has now been viewed over 10 million times. The following year saw Palmer expand her philosophy into the New York Times bestseller, The Art of Asking: How I Learned To Stop Worrying And Let People Help. In 2015, Palmer joined forces with patreon.com to further develop her revolutionary model of fan support and artistic community. The growing list of “Patreon Things“ - Palmer releases an average of two a month - now includes songs, original films, performance projects, and multiple full-length albums.