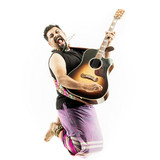 Bangalore based Raghupathi Dixit created and performed folk-rock music for around a decade before his debut album was released in 2008. First as the frontman of the highly acclaimed underground band Antaragni and later for Raghu Dixit Project, his music is soulful as well as vibrant, and incorporated languages like English, Hindi, and Kannada. A professionally trained Bharatnatyam dancer, Raghu chose songwriting as his preferred career and performed extensively around the country before launching his debut. Known primarily for his conventional acoustic alternative sound, his various musical projects employed some of the best underground talents of Bangalore and thus gave an insight to the inspirational qualities that a non-mainstream audience adheres to. ~ Bhasker Gupta, Rovi