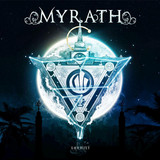 Blazing.Desert.Metal from Tunisia. Myrath honor their regional heritage by incorporating middle eastern instrumentation into their heady mix of power metal and cinematic prog rock. Based out of the coastal city of Ezzahra, the group was originally formed in 2001 as a covers band by guitarist Malek Ben Arbia, who at the time was only 13 years old. As the band continued to improve and develop some progressive muscle, they began writing originals and making festival appearances. In 2007, after issuing a Tunisia-only demo called Double Face two years prior, Myrath released their official debut album, Hope. Desert Call arrived in 2010, followed by Tales of the Sands (2011), and Legacy (2016)