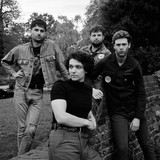 The Amazons are a four-piece rock band from Reading, UK, with stadium-ready anthems, slick riffs and sing-along hooks. It’s been a heady rise for the Reading-based quartet. The most hotly tipped guitar band of 2017 according to Music Week, The Amazons were shortlisted for the BBC Music Sound of 2017 poll, nominated for Q’s Best Breakthrough Act gong and made an appearance in MTV’s Brand New 2017 list. They also featured in Apple Music’s New Artists 2017 playlist and popped up in Amazon UK’s Ones To Watch and Deezer’s picks for 2017 polls. Their debut, self-titled album was released in May 2017 and reached #8 in the UK Album Chart. “This album is a belter, a shout-it-to-the-rooftops, punch-the-sky, yell-along-at-the-top-of-your-voice storm”, wrote the Daily Telegraph of the album, which includes singles ‘Junk Food Forever’, ‘Black Magic’ and ‘Ultraviolet’. Comprised of front-man Matt Thomson, guitarist Chris Alderton, coy bassist Elliot Briggs and powerhouse drummer Joe Emmett, The Amazons have been honing their music for a nearly a decade.