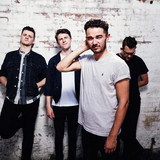 Four-piece punk rock outfit Max Raptor derived their name from the Guatemalan god associated with smoking and drinking, Maximón. All members of the band hail from a village in the Midlands, U.K. named Burton-on-Trent; they first met while attending the same school in the area. The band itself was formed in 2006, and consisted of Wil Ray (vocals), Matt Stevenson (bass), JB Wilcox (guitar), and Tom Garrett (drums). With a combination of accessible punk rock and socially aware lyrics, Max Raptor quickly gained a loyal fan base, and by 2009 was asked to support Billy Talent on tour; this was followed in 2010 by another support slot for the Stranglers. For their debut release in 2011, they came forth with a mini-album titled Portraits, but soon after it was released, Wilcox became a father and left the band, and Garrett followed suit to pursue his interest in other musical genres. Leading up to the debut full-length album, Mothers Ruin, in 2013, Ben Winnington and Pete Reisner were brought into the fold, on drums and guitar, respectively. By 2015, they had signed to independent punk label Hassle Records. To celebrate the move, they released the Damage Appreciation EP, quickly followed in 2016 with a self-titled album. ~ Liam Martin, Rovi