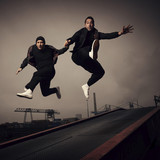 In 2016, Junge Junge aka Rochus Grolle and Michael Noack

still had underground status. Today their songs are streamed by millions and they have become platinum-decorated DJs and producers. And yet there was this one demo three years ago, which they heard - and which they never let go of since. The voice behind Wicked Hearts belongs to Jamie Hartman, who boldly steps into the limelight as a solo singer, after co-writing songs like Backstreet Boys' 'Don't Go Breaking My Heart' and Rag'n'Bone Man's 'Human'.   “From the very first second, we realized that this poetic language, the expansive and the deep fit us perfectly”, Rochus Grolle recalls. “We then got the tracks and produced it and thought that we would get the song. But a few months went by and we were told: Sorry, the song's gone, an AAA artist from Australia got it.” “When the song was still unreleased half a year later, we simply wrote to Jamie in L.A. and sent him our production and he immediately said: Cool, let's produce this. Let's do it together”. Grolle enthuses: “For us, it is of course awesome to have him on our project. We get along very well and are in constant exchange”.   “Wicked Hearts is the first song we are preparing a self-produced club mix for. People are more familiar with our pop productions through singles like 'Run Run Run' or 'Beautiful Girl' but still, we have an underground origin. Therefore, we will always release our own club mix in addition to the official single versions from now on”.