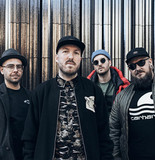 Wax Wreckaz are a DJ-/production-outfit hailing from Austria, to be exact: from Innsbruck. Founded in the early 2000s the crew consists of Busy Fingaz (Red Bull Thre3style Champ Austria 2016), Sensay, Fu and Juwee.   Besides their club- and festival-gigs all over Europe, they made a name for themselves with successful releases on labels like Top Billin, Jeffree's (Mad Decent) and Crispy Crust Records. Their tracks gained support by some of the biggest DJs worldwide and "High Grade" was even featured in the video game "NBA Live 14" in-game soundtrack (compiled and mixed by MICK) and Diplo’s Viceland tv-show „What would Diplo do?“. Hip Hop legend Redman used the "High Grade" riddim for his song "High 2 Come Down" on his album “Mudface”.   It seems as if radio- and web radio-stations all over the world also love what the Wax Wreckaz are doing, as their songs already had airplay from the USA to Canada, India, Trinidad Tobago, UK (BBC Radio1 Xtra, Capital XTRA, Kiss FM), France, Germany (Radio Fritz, N-JOY XTRA, egoFM), Austria (FM4) to Russia and Australia.