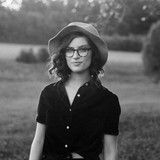 Harley is a Nashville Native turned New Yorker (with some Boston roots thrown in there too). After years of forcing her childhood neighbors to learn dances to songs she made up during the summers of the early 2000’s, Harley felt it was important to formalize her relationship with songwriting. She studied songwriting among her training at The Boston Conservatory at Berklee College of Music. Harley does lots of other stuff too so check out harleyseger.com. Cheers!