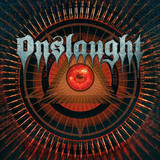 UK Thrashers 'Onslaught' have become one of the bands that are now synonymous with the brilliance of and endurance of today’s ‘Thrash Metal’ movement. 'Onslaught' led by founding member Nige Rockett are primed to set the world on fire once again with one of the most ferocious 'Thrash Metal' albums ever made: Generation Antichrist! Put simply, if you like your Metal music brutal and extreme, then this is definitely the album for you. Onslaught were formed in Bristol, England by Nige Rockett (guitar) & Paul Hill (bass) in 1983 and began life under the influence of second generation hardcore punk bands, but exploiting a strong desire for a more metallic sound and the love of 'Motorhead', they would quickly search out a more defined and original style. The result are albums such as “Power From Hell” (1985), “The Force” (1986), “In Search Of Sanity” (1989), “Killing Peace” (2007), “Sounds Of Violence” (2011) and

“VI” (2013). Now 'Onslaught' add a whole new level of brutality to their legacy with the devastating new album