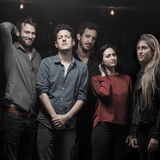 The eclectic indie-folk hipi band led by singer-songwriter Rotem Bar Or has spent the last two years working on their second album, "Nodyssey". The unique sextet ensemble which includes a Double-Bass, Viola, Clarinet and Classic Guitar, as well as two drummers sharing one drum set, has evolved together over the past six years and will soon release a new and very intimate band record. Not an easy thing to do with so many people in the room. theAngelcy have made a record that sheds true light into their inner world.

Rotem's new songs, in their soul-searching spiritual voyager-like essence, blend perfectly with the band's timeless arrangements. A unique ability discovered through their debut album, "Exit Inside".